Predicting the Emmy Nominations: Best Supporting Actress in a Comedy

Posted on June 4, 2013 by allinsparetime 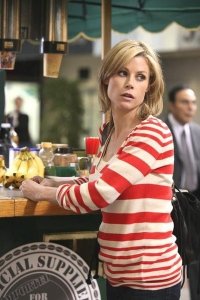 Yep, it’s time for another round of Emmy Nomination Predictions — this time for Best Supporting Actress in a Comedy Series!

Modern Family star Julie Bowen has taken home the prize two years running, and there’s no reason to think she won’t at least get nominated again this year, if not win the prize. (The Emmys do love their repeats!) Last year I, personally, would have given the award to Sofia Vergara, but over this season I began to find her performance a little one-note. Is it just me, or did she bring more depth to the role earlier in Modern Family‘s run? Either way, I think Vergara will, again, make the list.

Mayim Bialik received her first-ever nomination last year for The Big Bang Theory (how was she never nominated for Blossom?!?), and I think she’ll probably make the cut again, likely with her co-star Melissa Rauch in tow. And though I’m obssessed with Merritt Wever’s performance on Nurse Jackie, and was thrilled she got nominated last year, it feels a little like that show’s moment has passed. Was that nod a one-and-done, or will she back again as a nominee this year?

With the departure of both Desperate Housewives and the late Kathryn Joosten, along with Kristen Wiig no longer appearing on Saturday Night Live, at least two spots are open for new blood on this list. Former winner Jane Lynch had absolutely nothing to do on Glee this season, so despite her obvious comic gifts I’d be surprised to see her return to the fold. And though Betty White picked up a nomination two years ago for Hot in Cleveland, I’m hoping the era where we need to nominate her for everything she appears in has passed, and she, too, won’t fill one of the empty slots.

So who will? I would love to see Casey Wilson sneak in for her inspired work on Happy Endings; she is fearless and hysterical. Eden Sher has been underrated for years as middle-child Sue on The Middle — critics love her, but will the Academy? And how about the ladies from Suburgatory? Carly Chaiken received a Critic’s Choice Award nomination — could she, or her TV mom Cheryl Hines (a former nominee herself for Curb Your Enthusiasm) make the cut? HBO also has a couple of contenders in Zosia Mamet and Jemima Kirke from Girls (I just can’t see the wooden Allison Williams being recognized) and Anna Chlumsky from Veep. My personal choice would be Jane Krakowski, a nominee in the past for both Ally McBeal and 30 Rock — she was brilliant on the final season of NBC’s beloved show, and I’d love to see her back in the running.

Here’s how I think it will pan out when nominations are announced on July 18 — what do you think?

1 Response to Predicting the Emmy Nominations: Best Supporting Actress in a Comedy